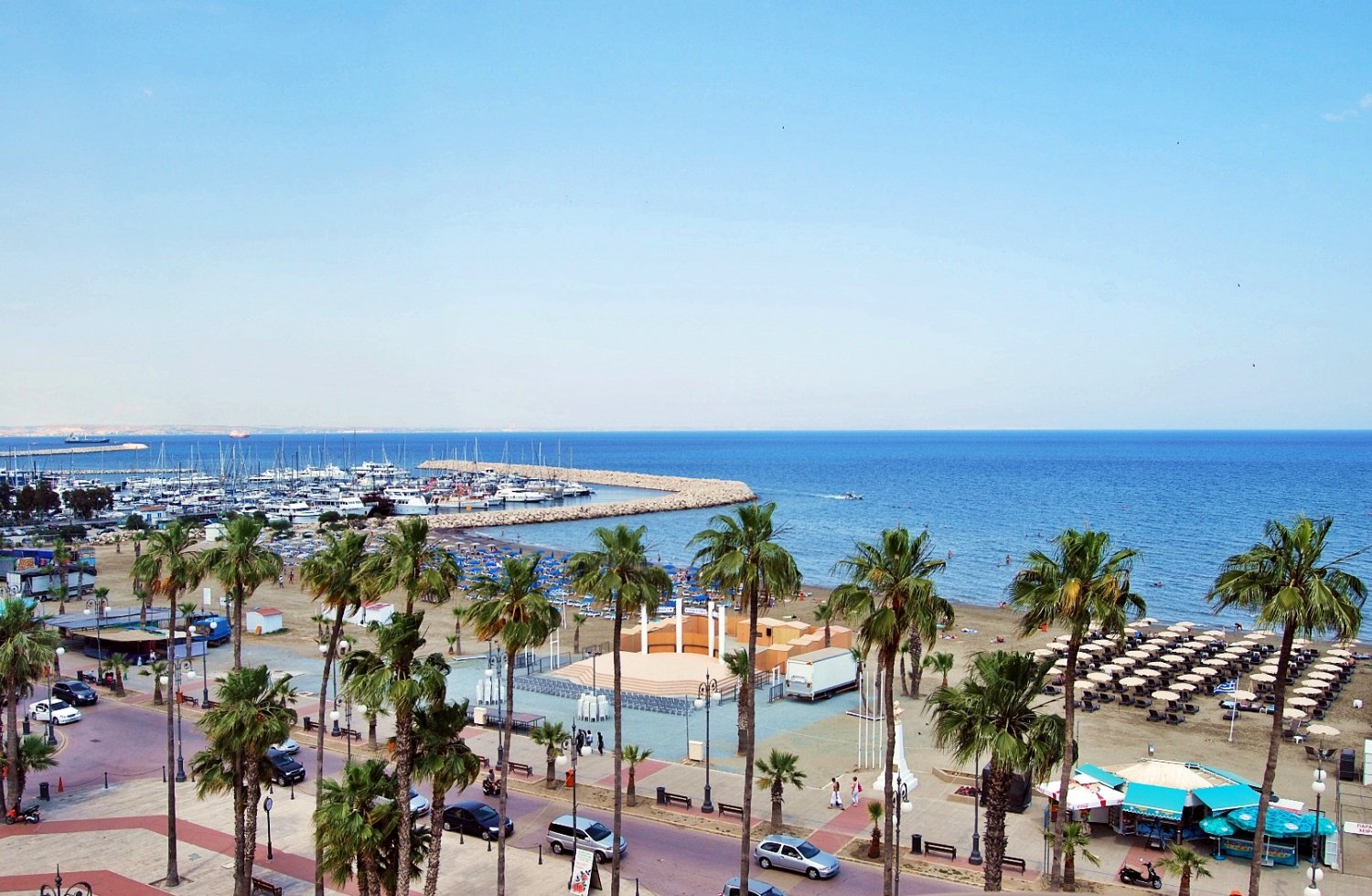 A beautiful picturesque town on the south eastern coast of Cyprus. Larnaka is one of the oldest continuously inhabited cities of the world and birthplace of the philosopher Zenon, founder of the Stoic school â later taking on his name â the Kition. During the 1888th century Kition was a commercial centre, the principal port and the seat of the European consulates.

Modern Larnaka is built over the ancient kingdom of Kition, the remains of which can be found in the heart of the city, reminiscent of glorious days.

Larnaka nowadays is regaining its old glory and importance thanks to tourist infrastructure, marina and the new astounding Larnaka International Airport.

Stroll along the lovely palm-lined sea front promenade known as the âPhinikoudesâ. Phinikoudes is one of the main streets of Larnaka and it hosts some of the most hip bars, restaurants and cafes, while the beach which lies at the side of the palm trees is a great favourite among locals and tourists alike. Along the Athinon Avenue is the statue of the ancient philosopher Zinonos Kitieos. The area is the venue for the two week Kataklismos fair held every year usually in June. Kataklismos fair meaning âfestival of the floodâ is the Christian feast of the Pentecost and is included in the UNESCO intangible heritage list.  It is the biggest folklore festival of Larnaka and Cyprus and is celebrated in all seafront towns of Cyprus. The fair is organised by the Larnaka municipality and attracts more than 300,000 people. The festival programme includes popular concerts, traditional competitions of dances, singing, poetry, music, satire, theatre, swimming and sailing contests and impressive fireworks.

Nearby is the scenic marina where you will see the locals walking on the romantic pier surrounded by yachts. At the far end of the âPhinikoudesâ stands the Larnaka fort, built in 1625. Today the castle houses the medieval museum. Close by is the beautiful Saint Lazaros church, one of the finest examples of Byzantine architecture in Cyprus. The church was build in the 10th century over the Saintâs tomb. Larnaka was the second home of St Lazaros where he lived after his resurrection and later became its first bishop. Next to the church one can also find the Ayios Lazarus Byzantine Museum.  Larnaka has a museum in every corner. Worthwhile visiting are The Larnaka District Archaeological Museum, The Laiki Group Cultural Centre, The Pierides - Tornaritis Palaeontology Museum, and The Larnaka Town Museum, The Larnaka Municipal Museum.

Actually, the best way to enjoy the magical beauty of Larnaka is to explore it on foot.  If you prefer an informative and guided tour you can select one of the two hour free Larnaka walking tours. If in Larnaka during the winter period then come into contact for the free Larnaka winter experiences and get a taste of the authenticity and tradition of the Larnaka region.

Larnaka is the hometown of one of the 10 most interesting diving wrecks in the world, the Zenovia wreck, and many people travel to Cyprus just to explore this wreck. The boat Zenovia sank in Larnaka bay in 1980, just 1 km from the coast, fortunately with no casualties. It is nearly 200 metres long and remains completely intact. The top of Zenovia is just 16 meters under the surface and all the trucks can be seen either in the wreck or lying on the seabed close by.

Another landmark of Larnaka, is the group of salt lakes near the old airport which form one of the two unique wetlands in Cyprus and are of significant environmental importance and beauty. For several decades in the last century, the salt from the lake had been processed until found unsuitable for consumption. Yet, the salt lake is still a most vital site for wild life. The salt lakes till up in winter make up a favourite stop over for thousand of immigrant birds including elegant pink flamingos, ducks, swans and sea gulls making up a photographic masterpiece. In recent years great attention is given to the preservation of the environment and the area has many unique spots to be enjoyed by the nature lovers.

Next to the salt lakes is the mosque of Hala Sultan Tekke, built in honour of the Prophet Mohammedâs aunt. The mosque was built in 1816 over the tomb of Umm Haram and is the third most important pilgrimage site for Muslims in the world ranking immediately after the shrines of Mecca and Medina. Tekke hosts cultural and entertainment events, as well as a small museum.

Outside the main town on the way to Limassol stands the old Aqueduct known as âthe Kamaresâ. It was built in Roman style in 1745 to carry water from a source about 6 miles south of Larnaka into the town and remained in use as late as 1930.

On the outskirts, the Angeloktisti Church in the village of Kiti has rare 6th century Byzantine mosaics and Stavrovouni monastery is one of the oldest monasteries in Cyprus. Choirokoitia and Tenta are important Neolithic settlements, the former being a world heritage site.

Larnakaâs perfect location makes it a perfect starting point from which to explore Cyprus and especially the region with its endless possibilities close by. Villages offering agrotourism, beautiful, sports and recreation, cultural events, religious tourism and authentic Cyprus taverns are just a pick.