During the first week of September, the wonderful melodic sound of Giachino Rossini’s music will fill Pafos Harbour for this year’s Pafos Aphrodite Festival - the 17th production hosted by the town. This year, the French international lyric organisation, Ramfis Productions from Avignon whioch performs all over Europe, will be co-operating with the Cyprus Symphony Orchestra to present La Cenerentola – Cinderella - probably one of the greatest fairytales of them all! Rossini set his opera, which is a comic – and romantic - drama in Italy in the late 18th century.

The Paphos Aphrodite Festival is always held during the first weekend of September – this year on Friday 04, Saturday 05 and Sunday 6 September 2015. It is a wonderful annual event with a much-loved opera being performed by an international company in the beautiful setting of Paphos harbour with its picturesque medieval castle with the moonlit sea beyond as a magnificent backdrop. No wonder that the Pafos Aphrodite festival attracts opera lovers from all over Europe.

La Cenerentola is a much-loved opera in two acts. When it first premiered in the Teatro Valle Rome in 1817 though, it received mixed reactions. Rossini (1792-1868) wrote it when he was 25 years old and just a year after his highly successful Barber of Seville. He based the opera on the popular fairytale written by Charles Perrault and he actually wrote the entire work in just three weeks! The problem was that there are more than 300 different versions of this fairytale with every culture across the world having its own version and Rossini’s opera certainly has a few differences in it, but soon the opera enchanted countless audiences and today is one of the most popular operas.

In his version of this wonderful fairy tale, Rossini was keen to give the audience the moral message that true kindness is always rewarded. in the opera, the fairy godmother is replaced by a guardian angel who is appropriately called ‘Angelina’. Nevertheless, Rossini wanted to strongly portray the magic of the fairy tale and to create a work with enchanting music so that his audiences would really enjoy the opera and Paola Panizza, the director of the performances in Pafos feels that Rossini’s opera is ‘a real ode to life and happiness. Certainly, Rossini wrote La Cenerentola during an extremely prolific stage in his life, as in the years 1816- 1823, he completed 20 operas.

In Rossini’s version of La Cenerentola, there is a kind young man Alidoro, Prince Ramiro’s tutor, who wants to repay Cinderella for the kindness she had shown him when he arrived at her family home disguised as a beggar and it is he who tells the Prince about her and who helps Cinderella get to the ball. The mean stepmother is replaced by a mean and rather vain stepfather - Don Magnifico, who is keen to see his two his two idle daughters - Clorinda and Tisbe - well married so that he can gain financially. Prince Ramiro asks Cinderella to marry him at the ball and she gives him a bracelet, telling him that if he finds again the wearer of the bracelet – she will marry him.

Interwoven in this beautiful opera are various themes that tackle the timeless issues of class distinction, the desire to climb the social ladder, the desire for wealth and glory and the vices of greediness and selfishness - which can be found in our modern day society. The strong message throughout is that goodness and virtue always bring many benefits – including personal happiness.

The Paphos Aphrodite Festival is a truly wonderful experience whether you are a seasoned opera lover or not as the setting is so spectacular as it is outside under the stars overlooking the harbour and the boats leaving for a night’s fishing – with their crew totally oblivious of the magnificent spectacle unfolding on the stage in front of the castle.

La Cenerentola is in two 50 minutes acts and in the intervals there is the opportunity to wander around the harbour and to enjoy some cool refreshments. There is seating for 2,200 people and with the opera written in Italian, there are subtitles in both Greek and English.

The nine members of the organising company, Pafos Aphrodite Festival Cyprus (P.A.F.C) have worked tirelessly over the years to establish the festival on the world’s calendar and today, opera lovers travel from all over Europe -and beyond- to enjoy the event. For the third year, it is with great pleasure and honour that My Guide Cyprus is one the festival’s media sponsor. 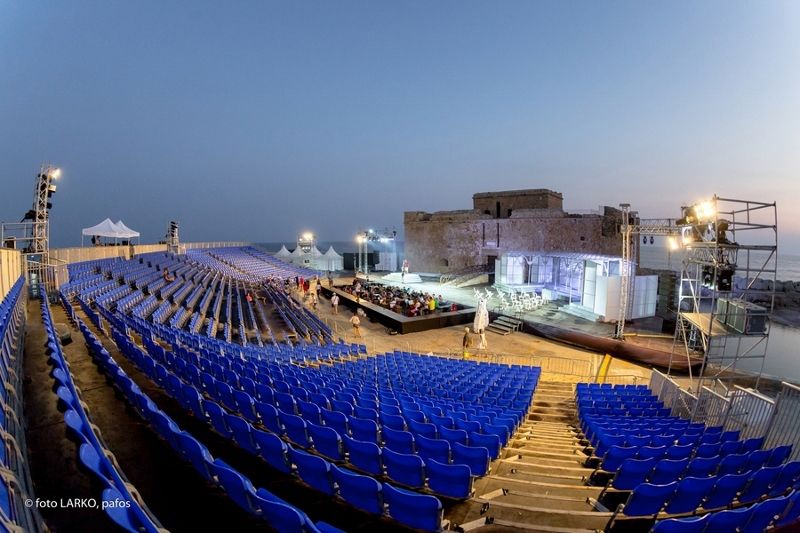