Nostalgic Walks Within the Inner City of Nicosia

If you are an irrevocable lover of wandering around the historical part of Nicosia either on foot or by bike, the following article is dedicated to you. If you cannot recall much about Nicosia, find herewith illustrated depictions of our capital city; not included in travel guides. Though it brims real enchantment, it sadly remains unknown to the majority of both locals and foreigners.

Setting off on your inner-city journey during the afternoon hours is highly recommended, when the (rather hot) weather becomes sweeter and the colours of the sunset flood the Nicosia sky over the old decayed roofs. 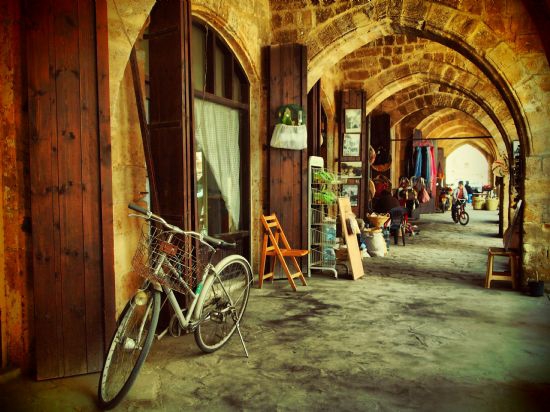 The most acknowledged starting point is near Tafros Ntavila, so you can walk across the remaining Venetian 16th century walls. Ignore the traffic caused by road works and all the restoration procedures near Plateia Eleftherias (meaning Liberty Square), pass over the Cypriot Library and crawl the multi-coloured narrow streets of the so-called Laiki Geitonia. Amid wooden tables with cheerful tourists enjoying tasty Cypriot dishes and cold beer, you may select from a variety of handmade Cypriot souvenirs for your loved ones.

After having enjoyed the colourful crowd  in Ledra street (do yourselves a favour: take a moment to gaze the picturesque balconies above the shops and restaurants), you will inevitably reach the end of Ledra street â this is the point where Nicosia is divided into two parts, the last divided city in Europe. The aluminium barricades have separated the city since the Turkish occupation in July 1974. Choosing to revert your walk you will soon reach Platia Faneromenis â and what a joyful time youâll have there. The Square is lately considered to be the heart of the city's entertainment. In rather traditional yet inquisitive cafÃ©s and ice-cream shops, one will meet people of all ages, chatting, giggling or discussing poetry or politics. Mostly during the evening different events take place; small bazaars with handmade jewellery, (there is the so-called âWomenâs - Bazaarâ in the Lodge, right at the end of Ledra street each Saturday), off-hand gatherings or live music events complete the daily scenery. Neighbours, local or foreign, are seated gossiping on the benches next to the church of Panagia Faneromeni , while in the courtyard of the church, under the signs of Archbishop Makarios, teenagers with messy hair and rock-star t-shirts skateboard vividly, while those who adore traditional desserts choose to sit aside at the retro pastry shop. 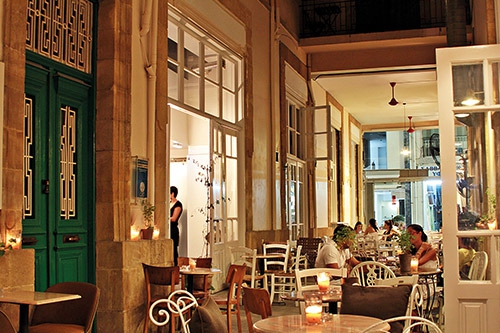 A feeling of nostalgia combined with pride arises in this area because the essence of abandonment dominates the narrow back streets. This sentiment is generating; Nicosia remains the sole divided capital city, and its pure melancholy is inherent, it is an integral piece that everybody carries inside themselves. However, during the past few years, a communal effort to revitalise this region is inspiring: cute shops spring up next to abandoned synergies, galleries are inaugurated next to bordellos, coffee shops offer lemon sodas to students or to retirees playing Backgammon,âtavliâ, and Cypriot wine to young artists who photograph (in an illegal yet fetching way) crumbling, half rotten stairs or windows in the neighbouring forgotten, vacant homes.
Continuing through the neighbourhoods of AgiosKassianos and Chrysaliniotissa, observe the big blue, green or red windows and the matching coloured doors (which have the inscription of the year that they were built on the upper part) and the courtyards with flower pots. In some of these neighbourhoods, in the so-called Taktakala for example, Hodgeâs voice is beautifully married with Christian hymns and children's laughs. However, the checkpoints and the young soldiers guarding the area, their presence conjuring an aura of nostalgia, collides sharply with historyâs consequences. The interrupted and fragile beauty is all over you but you cannot touch it entirely. The abandoned houses of 1974 are next to you, yet remain ever distant. 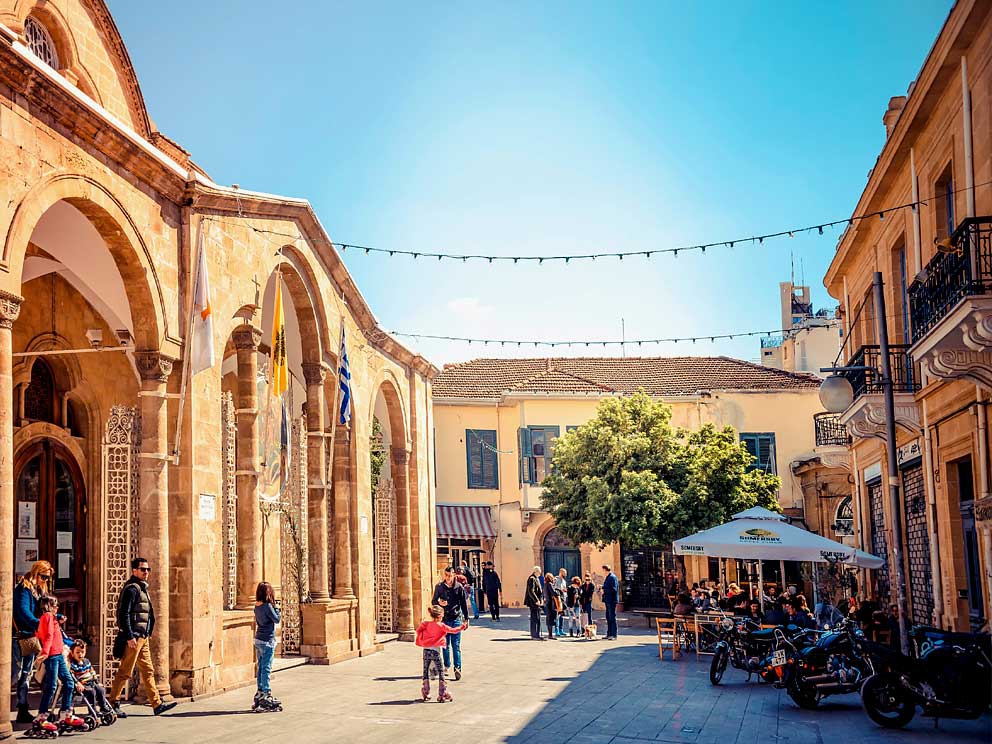 If you head to the side of the Archdiocese district, you may undergo the city's history in a museum-manner glance. Apart from the Museum of Folk Art in the courtyard of the Archbishop area, there is the Byzantine Museum, with the wonderful collections of paintings and religious objects. Next to the National Struggle(EOKA)Museum you may find the small Museum of the Pancyprian Gymnasium, which is another great historical school. Lovers of contemporary art will wander in the halls of the Nicosia Municipality Arts Centre, housed in the old Power Station building, which has hosted modernist art exhibitions since 1994. The Nicosia Municipality, wanting to comprise the old and the new, decided to erect the New City Hall Megaron opposite the centre. This action is thought to reimburse the (formerly) breathless area of Nicosia.

Seal the end of your walk with tasteful appetizers in the taverns near Famagusta Gate, sipping a glass of wine in order to honour the mixed up city of Nicosia, this beautiful but barefoot and fearful city left half forgotten in a corner, the suffering and the wars failing to blur out her pure glory. 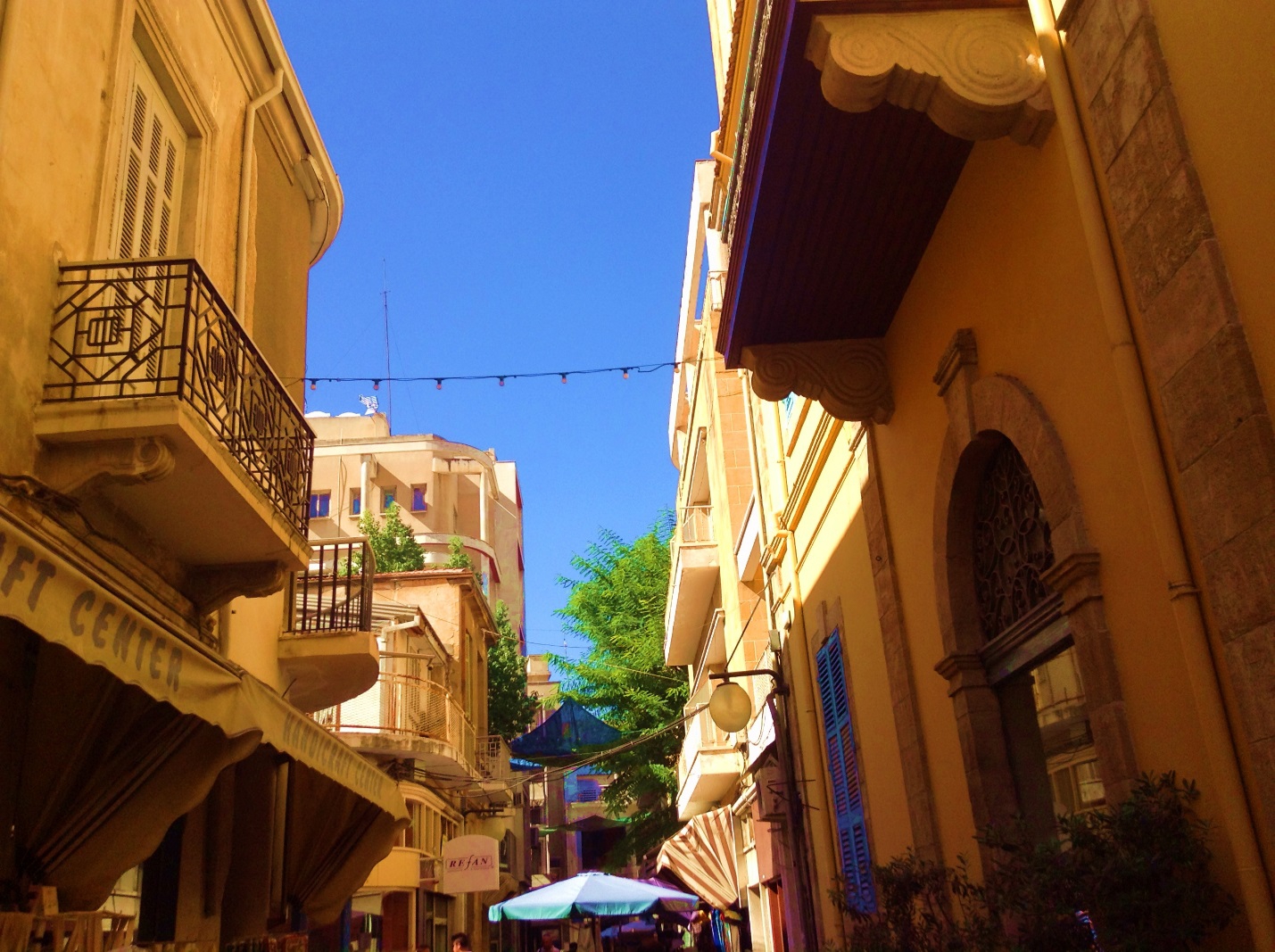