Not surprisingly, this area is popular with many of the couples who travel to Cyprus to get married.

Situated on the southeastern peninsula of the Republic of Cyprus is the popular holiday resort of Paralimni-Protaras.  Paralimni is just a few kilometers along the coast from Ayia Napa and is also close to the Green Line that has divided the island since the Turkish Invasion in July 1974. The year-round sunshine and the natural beauty of the area along with the attractive property prices have led to the bourgeoning number of investors who want to âbuy a place in the sun'.

The main town of Paralimni, is small enough to discover comfortably on foot and it is easy to get your bearings from the town square. The latter is dominated by the metropolitan, three-aisled church; dedicated to St. George the patent saint of Paralimni. The church was built in the traditional Byzantine style and is full of contemporary frescoes. Close by stand the gothic church of St George; which was built a century ago; as well as the byzantine, 13th century chapel of Ayia Anna. The latter was built using local limestone and now serves as museum where icons of the 16th and the 19th centuries, holy relics and old books are exhibited.

The townâs square is overlooked by trendy cafes serving a wide range of coffees among which the ever-popular frappe (iced coffee). Walking down the quaint streets of Paralimni there is an air of timelessness about the place which is enhanced by the traditional coffee shops - kafÃ©nions where men spend their time discussing local politics and playing Tavli (backgammon). Itâs certainly inviting to join their company and relax while sampling the authentic cypriot hospitality over a cup of Cyprus coffee. Close by stands the Town Hall which has become a popular venue for civil weddings and the open amphitheater where concerts and other cultural events are held during the summer months.

Protaras, the tourist area, stretches for about 10km along the eastern coast of Paralimni. Hundreds of windmills grant the landscape a quaint, tranquil beauty.  The coast is renowned for its fantastic assortment of beaches, considered by many to be the best on the entire island.  Most of these bays have been awarded the prestigious Blue Flag status for their outstanding water quality and public facilities. 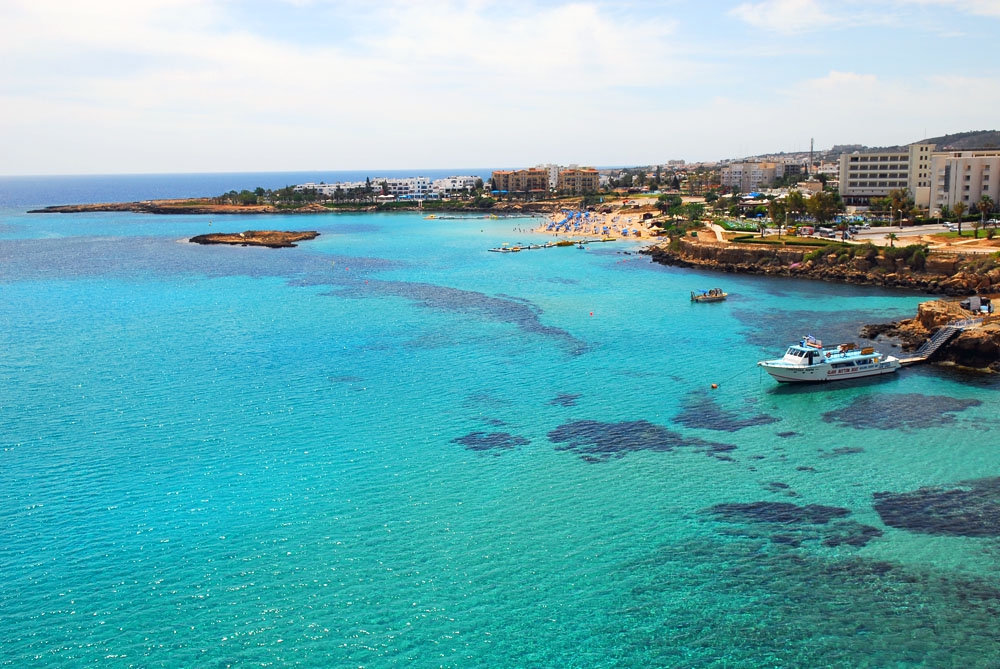 The most popular of the bays is âFig Tree Bayâ and it was named after a solitary fig tree that stands by the headland of the beach.  The tree has patrolled the coastline ever since its arrival with eastern invaders in the 17th century.  Itâs got fine-grained gold sand and shallow clear waters.  The beach is made even more picturesque by an islet at its north end.  The little island helps to keep the seas calm and it is at the same time easily reachable for exploration by adventurous swimmers.

Moving north from Fig Tree Bay you can find the long beach of Flamingo as well as little coves such as Marlita.  Louma beach is found near the scenic fishing harbor of Ayios Nikolaos overlooked by the white washed chapel dedicated to the saint.  Pernera has got soft fine sand that makes it a pleasure to walk along barefoot. On the other hand, Ayia Triadhaâs sand is coarse but its shallow waters make it a popular spot for launching boats.

If you want to bypass the busier beaches Green Bay and Vizakia are ideal. They are located south of Fig Tree Bay and are excellent for a leisurely swim and snorkeling. And the selection does not end hereâ¦ So whether you look for a secluded beach or a cosmopolitan bay youâve certainly come to the right place!

You might decide to engage in the âart of doing nothingâ and merely spread out a towel and soak up the sun before indulging yourself in the warm safe Mediterranean waters.  But still in the case that you enjoy 'a slice of the action' though, opportunities for watersports abound in Protaras beaches ranging from water skiing and paragliding to snorkeling and scuba diving. Diving guides are highly trained and qualified. Hop on a boat for a day and have a lovely time while enjoying impressive views of the coastline, especially of the Cape Greko caves.

Exploring the area is fun! Protaras boasts a lengthy promenade perfect for a leisurely bicycle ride, a sunset stroll or jogging. 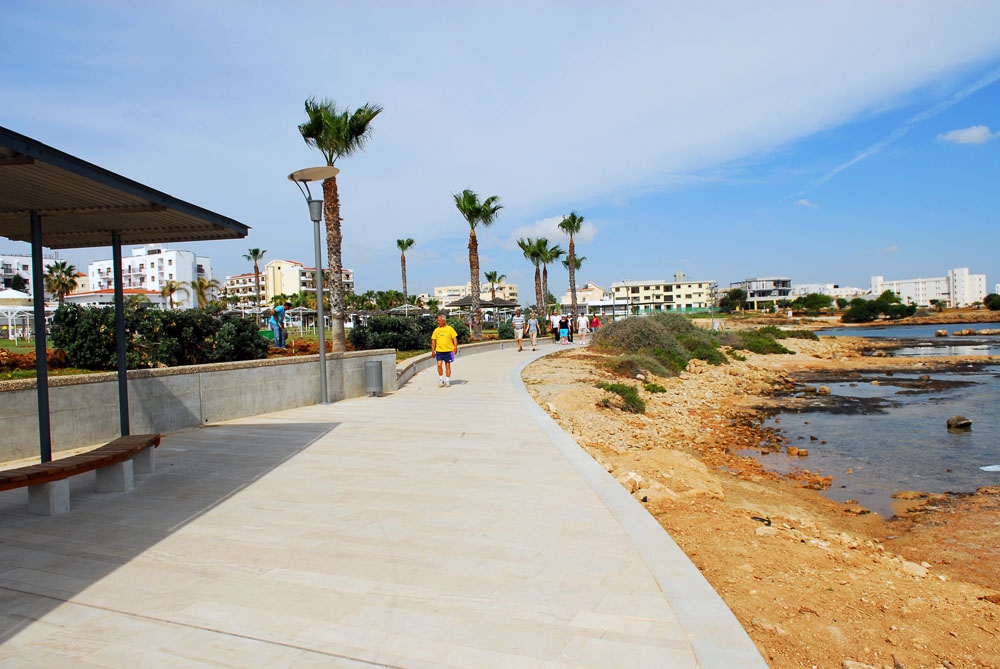 For a totally different perspective you can take one of the nature trails or by bike follow one of the designated paths. The nature trails passing through Cape Greko National Forest Park are full of surprises. The park is of great ecological value and hosts rare species of flora and fauna. Along the trails you will enjoy seamless view of the turquoise water and little chapels will be emerging every now and then, betraying the orthodox character of the place, such as the little white church of Ayioi Anargiroi which is built over a sea cave.  Take the stone steps that lead to the cave where it is presumed that the saints lived as ascetics.
For those with plenty of energy there is always the Byzantine church of Prophitis Elias (the Prophet Elias) which overlooks the resort from 100m-high.  The 153-step ascend is rewarded with panoramic views of Protaras and the coast.  On a clear day you can see the Karpasia peninsula in the occupied part of Cyprus to the east. The church is a modern building but perches on a limestone crag and at night looks particularly beautiful as it is floodlit. Not surprisingly, this area is popular with many of the couples who travel to Cyprus to get married.
The picturesque coastline is lined with hotels and self-catering apartments.  There are plenty of dining options too, from a tasty snack in a bar to a sophisticated a la carte meal and evening entertainment includes bars, dancing till the morning or a romantic stroll along the beach. The resort is particularly popular among British, Scandinavian and other European families.  The safe seas, the sandy beaches, most of them patrolled by lifeguards make it ideal for families. Restaurants are child-friendly, while many watersports are suitable for kids. The water parks, the mini zoo, the aquarium are places where all the members of the family will have moments to cherish. 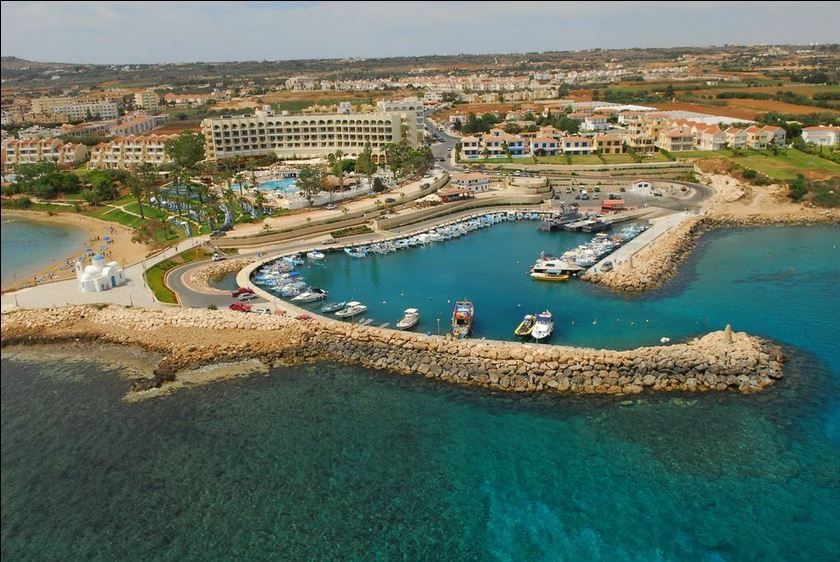