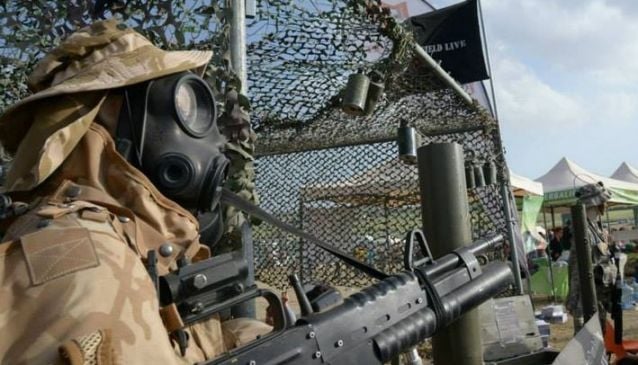 Combat Laser and Paintball games are so realistic that you will certainly get a rush of adrenalin.

The Combat Laser simulation scenarios feel so real because they are influenced by the designs used for military and police training and include forest, trenches and close quarter scenarios to test your speed, skills and accuracy.
Military and police units worldwide use the same technology with the core tech focusing on infra red light -just as used by the US Army and Nato in its M.I.L.E.S systems - also so sophisticated that it looks, feels and performs like the real thing - you just can't get better!
Only the best gear is given to participants - fully US Army ACD BDU and if you really want to be a 'crack sniper' a gillie suit too. The location for Combat Laser simulation is situated near Larnaca in a massive area of 22 acres with 6-8 different field areas ranging from easy to complex. Sessions last 21/2 hours and after participants are organised in teams and kitted out there is a safety brief followed by excellent tactical tuition because safety and enjoyment are of paramount importance. Live play sessions last 15-20 minutes to test the team's organisation, planning and competence.

Paintball is enjoyed either in a trench or close urban environment in a large field using real military equipment and based on real military training which is used by military and police forces across the globe. Participants are kitted out with top quality kit including new upgraded masks, knee and elbow pads, snoods and gloves before choose their weapon - there are M4A1 automatics, snipers and submachine guns with laser designators and they are impressive as they sound, feel and react just like the 'real thing'.