The residents of Lefkara have warmly welcomed visitors for generations

At an altitude of 700 metres and nestling in the foothills of the Troodos lies the larger of the two villages of Lefkara. 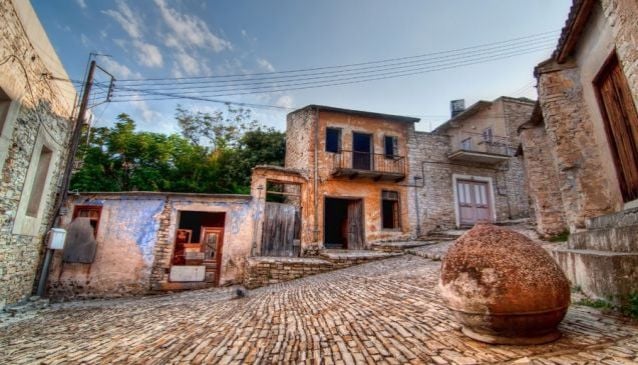 Pano Lefkara is a village with a rich historical inheritance that can be traced back to Neolithic times and is there for visitors to discover as they wander through its winding streets and narrow alleyways. Close to the Post Office there is a stunning group of archways and many of the buildings have beautiful old wooden doors with an array of different knockers including several in the style of a ladyâs clenched fist.
During the summertime, all the houses are colourful as flower filled tubs adorn staircases, balconies and every nook and cranny. 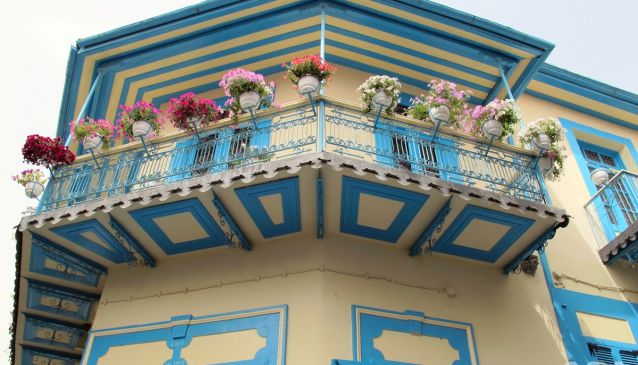 The village is well known for its fine examples of different architectural styles with some buildings dating from the years of Ottoman empire (1571-1878) with their characteristic flat earthern roofs and few windows to the magnificent later styles with their clay tiled roofs and walls clad in local limestone and it is this stone that gave the village its name â lefka ori meaning âwhite mountsâ. Cypriot houses were traditionally built around a large shady central courtyard -'avli'- where even today the family dines together in the summer months and the women of the house gather during the day under the canopies of vine leaves to prepare vegetables for the evening meal or to sit in groups to discuss their families as they embroider. In the last few years, many of the houses in the village have been lovingly restored by their present day owners. 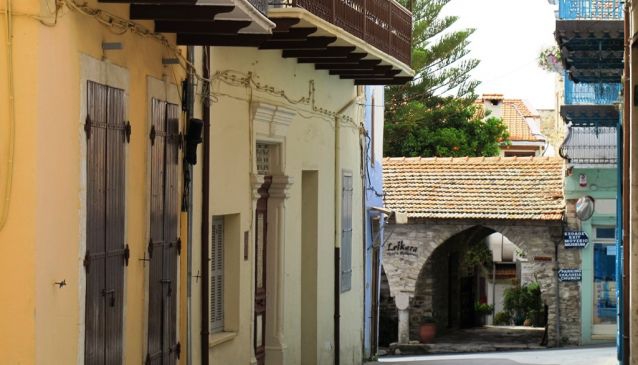 In the heart of the village community is the Church of the Holy Cross which was built in the mid 19th century on the spot once occupied by a Byzantine church. It is said that this location was chosen by Saint Eleni and inside the church a fragment of the Holy Cross is kept. This church has a particularly beautiful 18th century iconostasis. 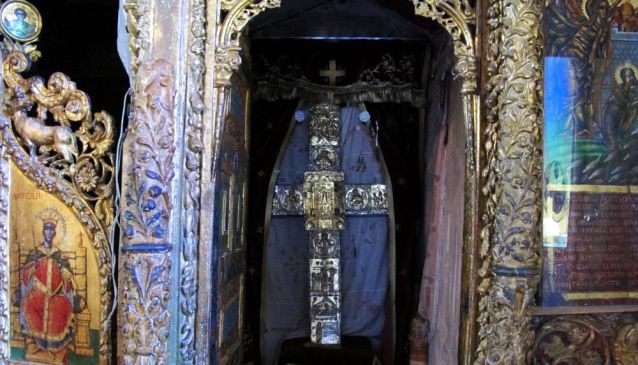 Another beautiful church that is worth visiting whilst you are in the vicinity, is the Church of Archangelos that stands in a field close to the smaller village of Kato (Lower) Lefkara. Kato Lefkara is much smaller than its big sister but is nevertheless still worth exploring as it too has a wealth of traditional architectural styles to enjoy. 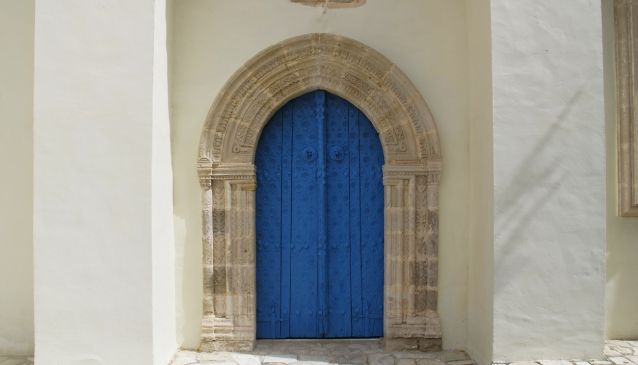 For many years, the name âLefkaraâ has been synonymous with the beautiful intricate lace embroidery called Lefkaritika, which has been made there since the Middle Ages. The women in the village were taught how to stitch beautiful lace embroideries by the Venetian women during the years of Venetian rule (1489-1571). It is said that when Leonardo da Vinci visited Lefkara, that he was so impressed by the intricacy of the embroidery that he took a magnificent altar cloth back to Milan Cathedral and even to this day, the villagers regularly present the Cathedral with an altar cloth in memory of this.
Early in the last century, whilst the women stayed at home spending hours making the Lefkaritika, their husbands and sons travelled far across Europe with suitcases of their handiwork selling the beautiful pieces before returning home. In 2009, to the delight of the villagers their beautiful handicraft appeared for the first time on the UNESCO Cultural Heritage List and today the craft is a thriving one with many young girls learning Lefkaritika from their grandmothers and even though many of the stitches are steeped in tradition, each person incorporates their individual personality with each stitch. 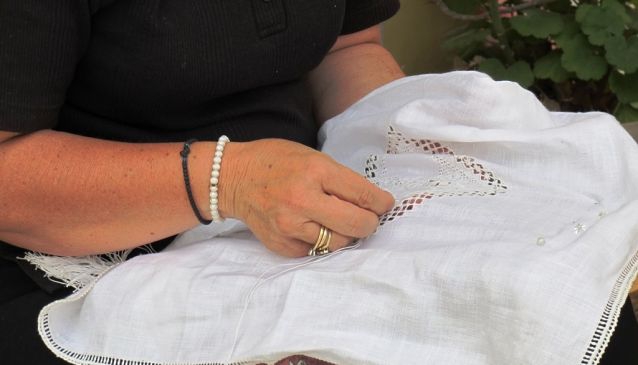 Wandering through the winding village streets, women can still be seen sitting in the leafy shade of the tees in groups, chatting together whilst they embroider intricate patterns on cream coloured linen which is stretched taut across a velvet cushion.
There are a number of Lefkara shops lining the main street and a piece of Lefkaritika is the perfect souvenir for many of the visitors to the village. 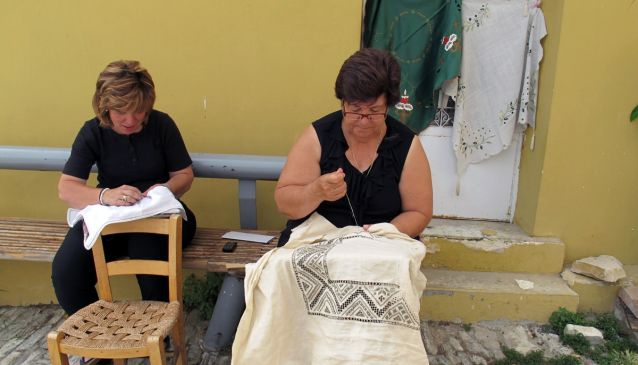 Since the last century, Pano Lefkara has also become well known for its silverwork and its craftsmen can be found in their workshops rhythmically tapping the metal with their hammer. The first silver craftsmen settled in the village because there are many churches in the area containing precious icons covered in silver to protect them.
Today the craftsmen still make and restore icons but also make jewellery, dishes, incense holders and sets of glyka spoons (for eating preserved soft fruits). 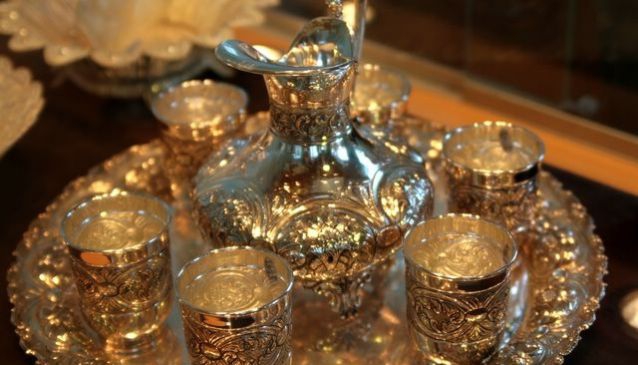 The craftsmen use two methods to make these beautiful pieces. The first technique is called âmetal spinningâ which was first practised by the Ancient Greeks and Romans. They also use âtypomaâ which is a method of pouring molten silver into moulds made in fine sand. The third method â and probably the most characteristic and famous style of Lefkara silverware is âtrifoureniaâ (filigree work). Fine silver wire is bent and twisted into intricate patterns by the craftsman â who each has his own signature designs. 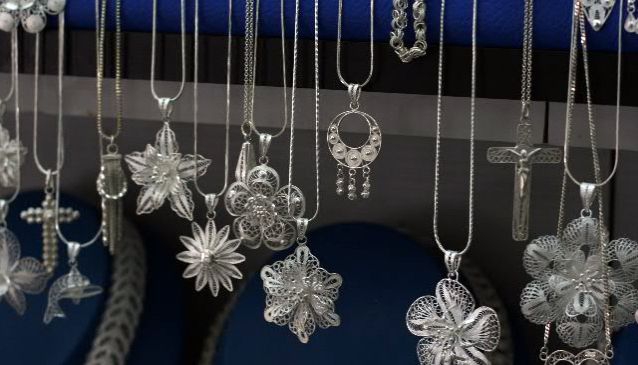