On Saturday 18 and Sunday 19 March, thousands of runners from Cyprus and abroad will be taking part in the 11th OPAP Limassol Marathon GSO. This event attracts more than 13,000 athletes and is the islandâs largest sporting event. This year, for the first time in its history it will be a two day event and once again, My Guide Cyprus is proudly the media sponsor. 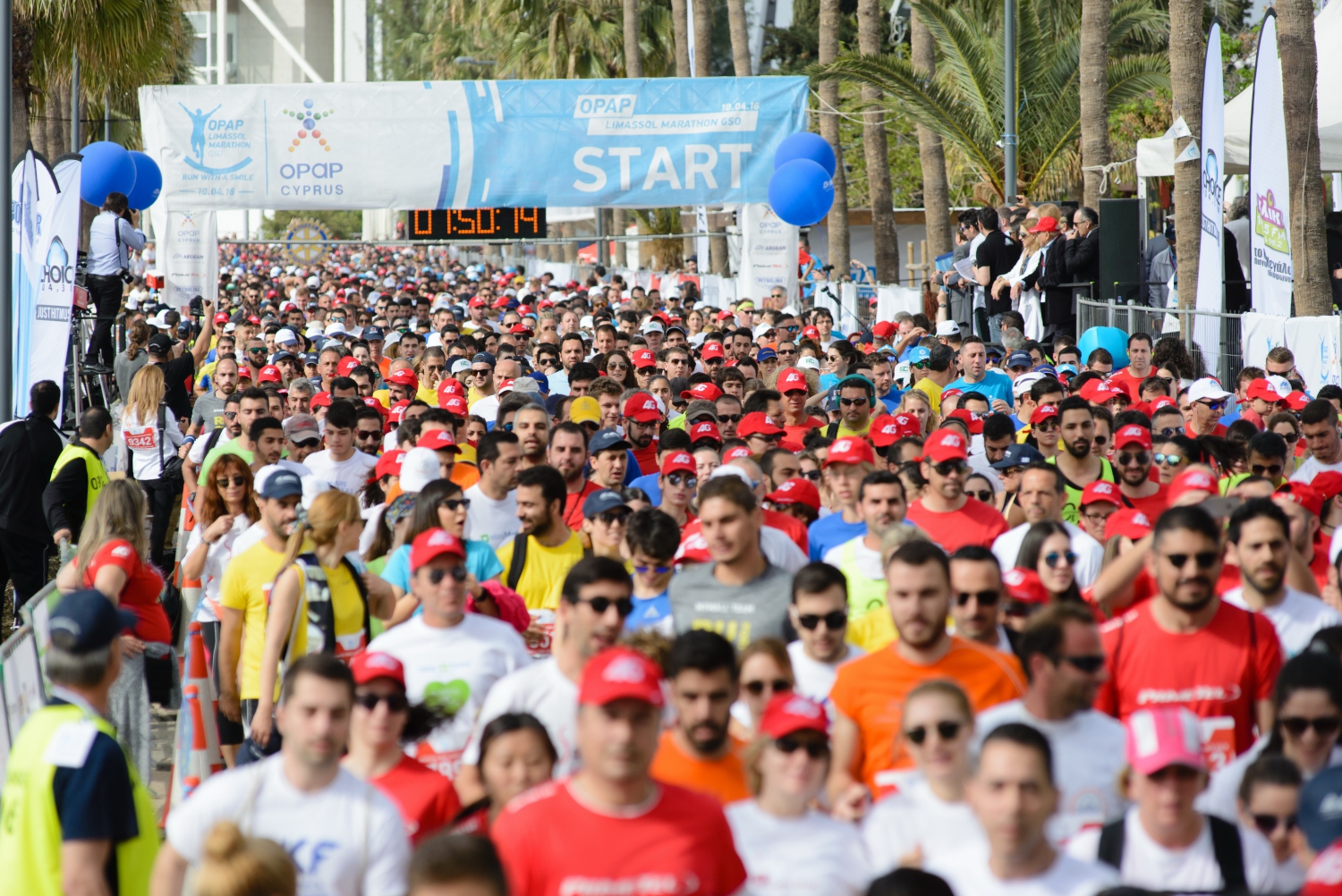 The organisers of the OPAP Limassol Marathon GSO describe the course as âfast and flatâ and one with âa low degree of difficultyâ making it ideal for those running a marathon for the first time as well as experienced runners aiming to improve their time. It is a flat course (rising only 18 metres at the 22 kilometres point at Ayios Tychonas) and relatively straight as it follows Limassolâs beautiful coastal road. As well as the relatively easy course, the Limassol Marathon is popular because it is one of the most beautiful in the world, overlooking the Mediterranean for much of its course. Coupled with golden sunshine and a warm Cypriot welcome, runners definitely find it easy to âRun with a smileâ! 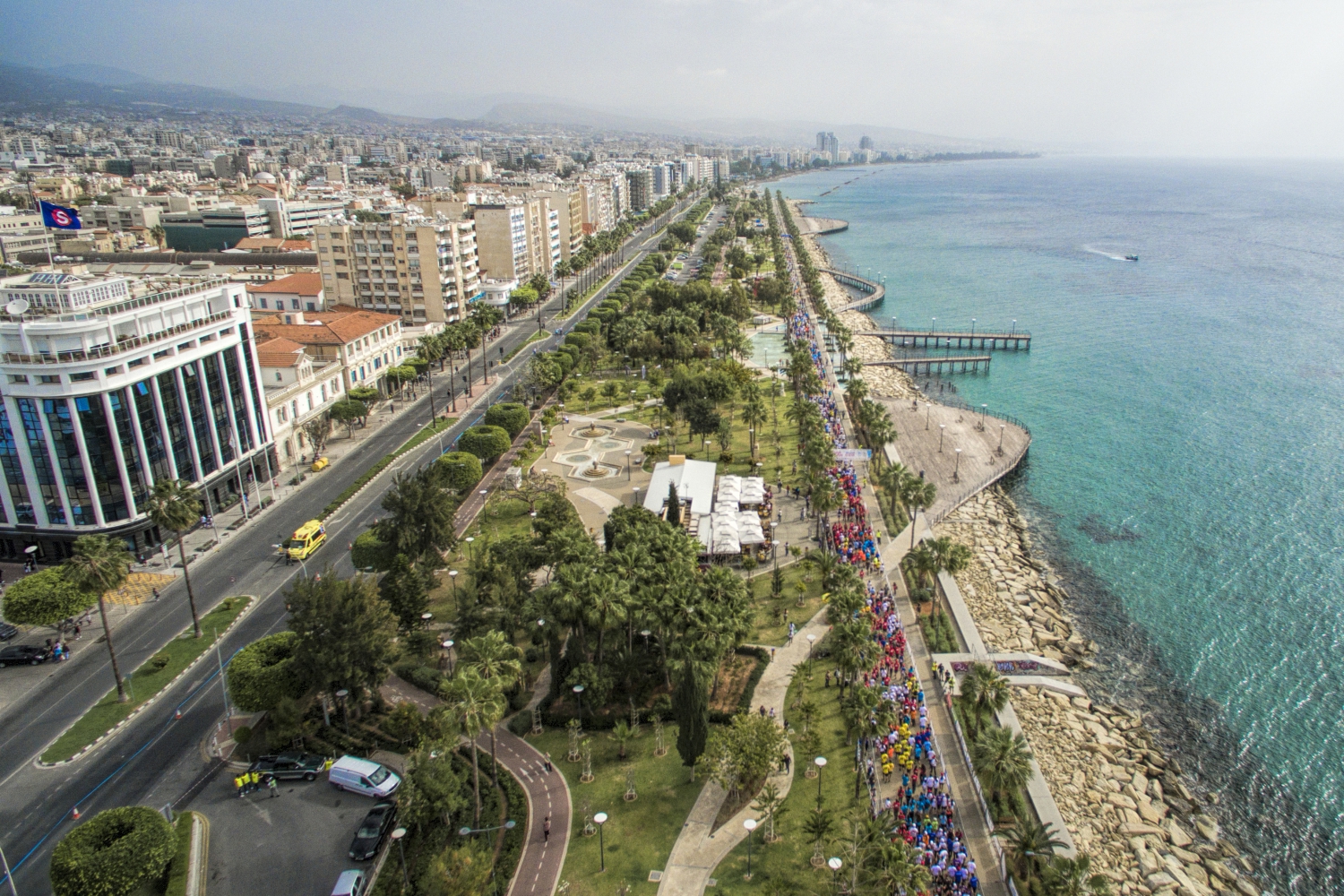 The OPAP Limassol Marathon GSO comprises of six different events. The Marathon (42.195 kilometres/ 26.2188 miles), the Half Marathon (21,000 kilometres/ 13.059 miles), the 10km Petrolina Energy race, and two five kilometre events - the âCity Raceâ and the âPrimeTel Corporate Raceâ. There is also the one kilometre Audrey & Julia Dashin Foundation Youth Race for 6-16 year olds. There are also six different age categories, including one for those aged 70+ years. 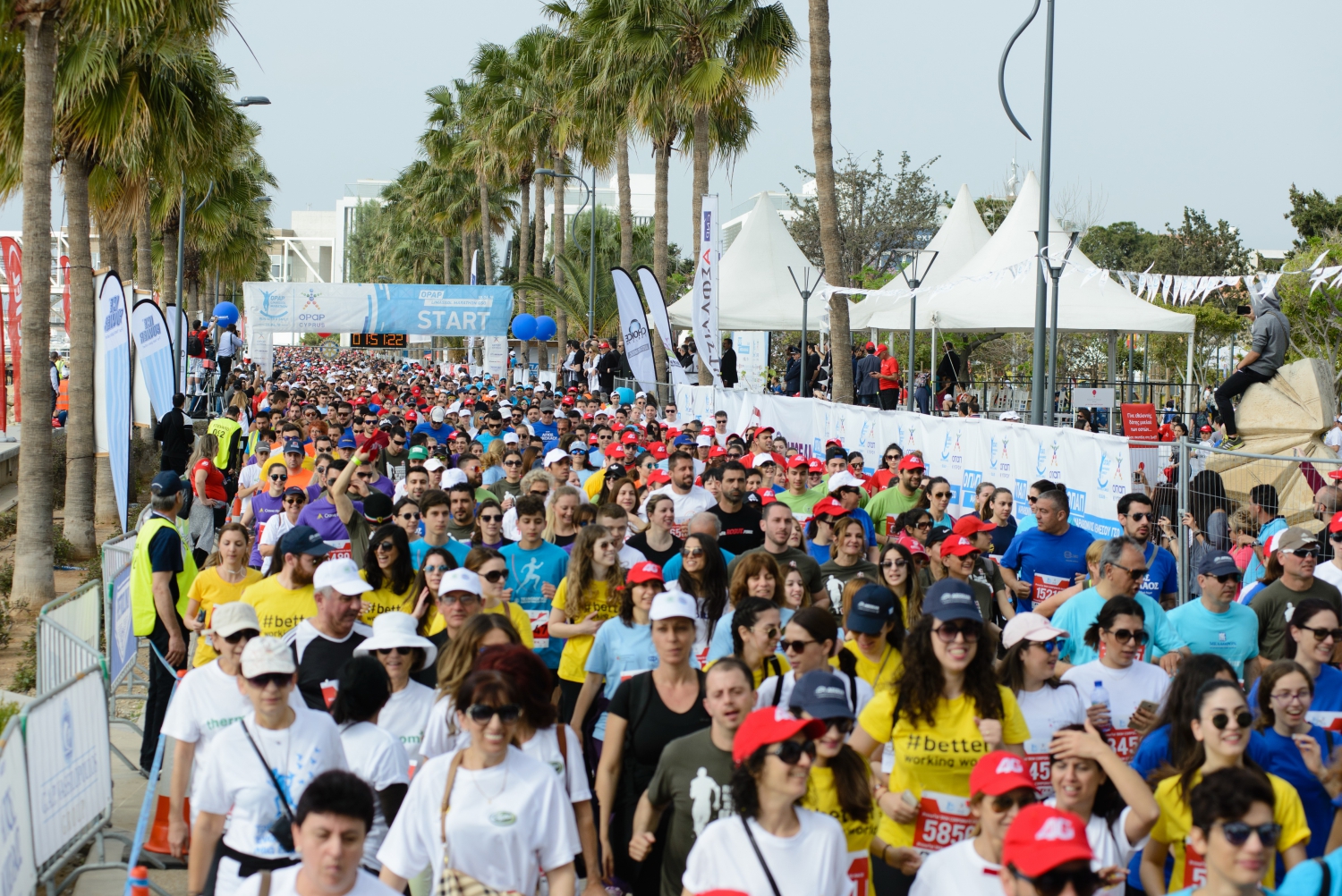 Many runners from overseas enjoy travelling to Cyprus for this event as marathon running began in this part of the Mediterranean. Legend tells how in 490BC, the Greek soldier, Pheidippides, ran for two days from the Battle of Marathon to Athens to deliver the important news that the Persians had been defeated. He arrived at the Senate and proclaimed nenikekamen â we are victorious â before collapsing and dying on the steps of the Senate.
The Marathon was one of the events in the first Olympic Games which were held in Athens in 1896. The distance for the marathon was set at 26 miles and 385 yards (42.195 km) in 1908 when the Olympics were held in London. The course had been outlined to run from Windsor to White City - a distance of 26 miles exactly, but at the last moment, an extra 385 yards was added to the distance so that the Royal children could see the event begin at Windsor Castle! The marathon is still a popular Olympic event and traditionally the menâs marathon is the final event of the Games. The finishing line is always in the Olympic stadium and the arrival of the first runners is incorporated in the start of the closing ceremony. Today there are more than 500 annual marathons held throughout the world.

The event begins on Saturday 18 March at 09:00 with the 5km PrimeTel Corporate Race which was the most popular event last year with business teams from all backgrounds taking part. It is certainly an excellent way to develop team building!  Later in the morning the Youth Race will be taking place. The Sponsors Village will be situated at the Old Port at Molos and will be the scene of plenty of fun entertainment during the afternoon including music, dancing, aerobics and Zumba. In the evening there will be a colourful Pasta Party.

The starting time for the 2017 AIMS accredited OPAP Limassol Marathon GSO, Half Marathon, 10km Petrolina Energy Race and 5km City Race is 07:00 on the Sunday morning. All the races will begin on the sea front in the Molos area by the coast (near Limassol Castle). The Marathon runners will head westwards to the New Port area, where the route loops back and heads eastward along the coast road towards the historical site of Ancient Amathus before looping back westwards to the finishing line on the sea front at the Molos promenade. 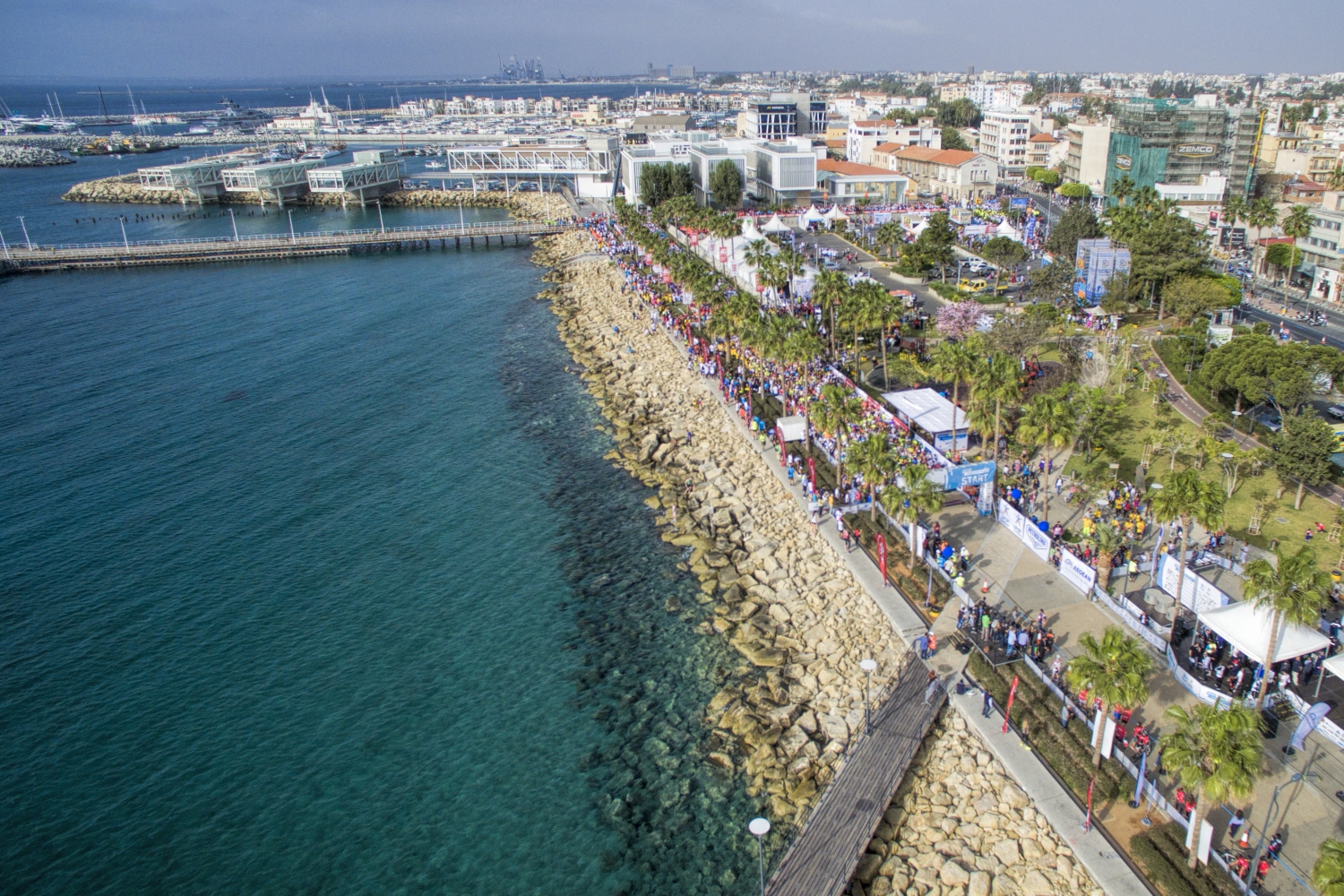 For those who are determined to win there are some great prizes too! The winning three male and female runners of the Marathon will be awarded cash prizes of â¬2,000 for first place â¬1,500 for second and â¬1,000 for third (providing their finishing time is less than 2:17:22 for men and 2:50:00 for women). There is the added incentive that if they beat the current time record of 02:13:29 (men) or 02:38:56 (women), their prize money will be doubled! There are cash prizes too for the fastest three male and female runners in the Half Marathon event and again there is the great incentive to beat the current time record (01:04:19 for men and 01:12:35 for women) and secure double prize money! There will be trophies awarded to the fastest runners of each sex in each age category and trophies for the first team to finish in the PrimeTel Corporate Race. At the OPAP Limassol Marathon GSO everyone is a winner as each runner will be awarded a medal and certificate of participation.

Behind the scenes, the Limassol Marathon is an extremely well organised event with more than 500 local volunteers ensuring that all runs smoothly! There is a refreshment station offering mineral water located every 2.5 km and there are plenty of marshals and First Aid personnel along the route too. All runners are expected to have finished in six hours and afterwards everyone enjoys warm Cypriot hospitality at the celebration party with music and dance bands entertaining everyone.

Now is definitely the time for action! If you would like to try your luck in one of the events comprising the 2017 OPAP Limassol Marathon GSO, registrations for both individuals and running clubs are being taken on the eventâs website. There is plenty of information about all the races on the site and about entry fees â as there are generous discounts for several different categories including university students.

So why not make 2017 the year you run with a smile in Limassol? 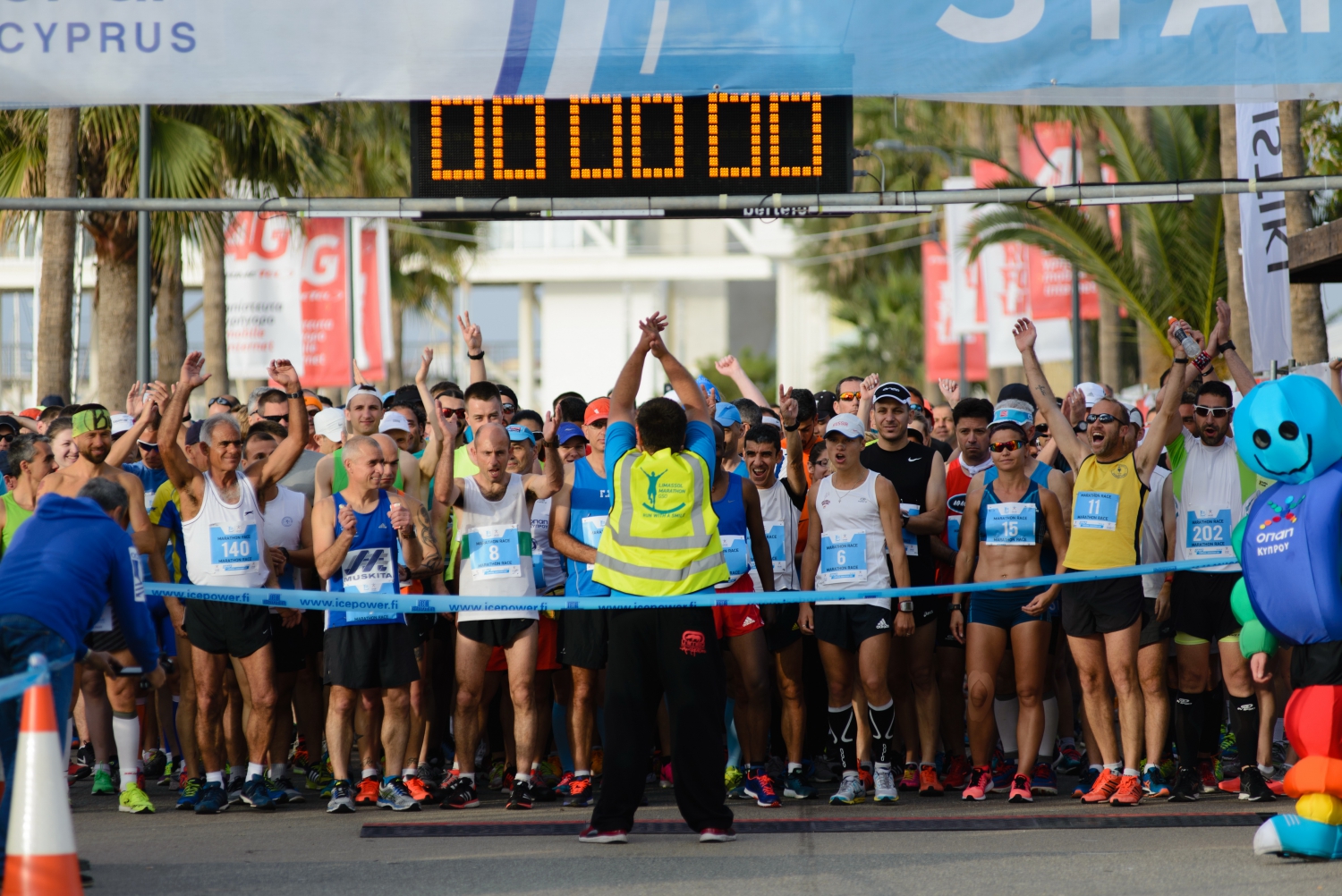