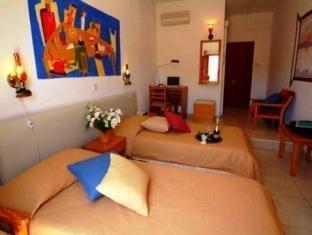 This traditional house in the heart of Paphos is a 15th century Venetian building, which was first converted into a hotel in 1924, Completely renovated in 1995, it is perhaps the most traditional of Paphos hotels, it still maintains its original character and uniqueness and is of course a listed building. The hotel is found in Makarios Avenue only a couple of minutes away from the old town market and a short bus ride away from Paphos harbour with its Venetian fort and the UNESCO sites of aincient Paphos.

The Kiniras hotel has become know over the last few years as a landmark, meeting place and a favoured venue for eating out in Paphos. The architecture of the building gives an irreplaceable expression of the wealth and variety of its cultural background and this is complimented by the artwork that adorns the walls from its owner, George Gregoriou.