Not surprisingly, this area is popular with many of the couples who travel to Cyprus to get married.

Situated on the southeastern peninsula of the Republic of Cyprus is the popular holiday resort of Paralimni-Protaras. Paralimni is just a few kilometres along the coast from Ayia Napa and is also close to the Green Line that has divided the island since the Turkish Invasion in July 1974. Paralimni is the main town in the region of the 'free part of Famagusta' - the area that was divided by the Green Line and became a municipality in 1986. Although it has long been an agricultural area, today it combines both traditional village life with all the aspects of a contemporary town - making it a really popular holiday destination. Paralimni is also developing as its attractive property prices are attracting many foreign buyers - especially as it is the first place in Europe to be greeted by the morning sun.

The town's name âParalimniâ means ânext to the lakeâ, but the lake in question was dry for most of the year and some years ago the land was reclaimed for agricultural purposes. The land surrounding the town has rich red soil that is extremely fertile and it is here that the famous Cyprus potatoes are grown - the climate is so good that farmers have two crops each year! The land is flat and dotted with windmills which draw water from underground aquifers to irrigate the crops. A wide selection of fruit and vegetables are grown in the area including juicy beef tomatoes and really huge cabbages! 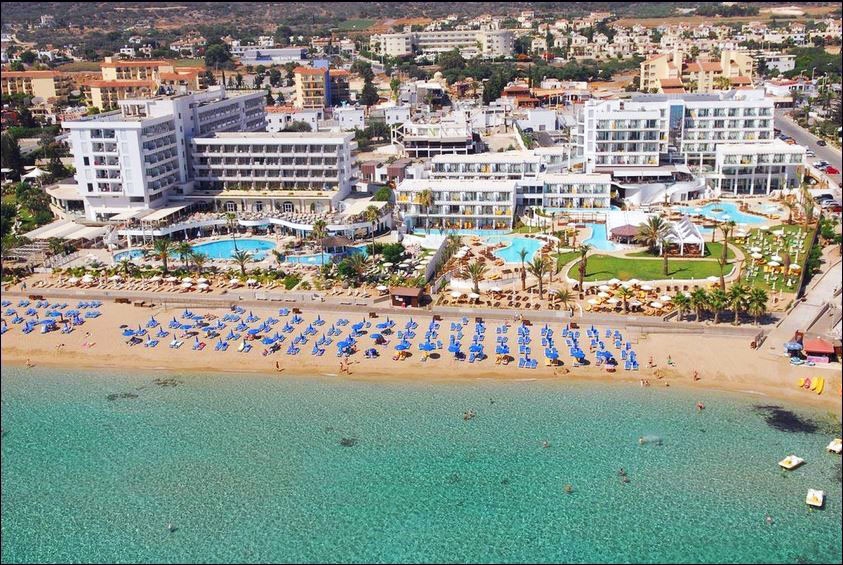 Paralimni has a population of just over 11,000 and is small enough to discover comfortably on foot and it is easy to get your bearings from the three churches in the heart of the town. The oldest of the churches is the large modern three-aisled church of 'Ayios Georgios'  - Saint George - and although it is full of contemporary frescoes it was built in the traditional Byzantine style and has a beautiful carved wooden iconostatis (altar screen). The huge fresco inside the dome is particularly beautiful and depicts the âAll Powerfulâ surrounded by Archangels, the prophets and the Saints. Close by this church is an older one, also dedicated to Saint George. This church was built a century ago and is Gothic in style with few frescoes but an interesting gilded iconostasis and several portable icons. The oldest church is the church of the Panayia (Our Lady) which was built in the shape of the cross (using local limestone) on the site of a 13th century chapel dedicated to Ayia Anna. The church has two chambers and the southern one is newer. Originally it was totally covered in frescoes but today only traces of them can be seen.

The church of St George is dedicated to the Patron Saint of Paralimni and dominates the town square which is overlooked by a mixture of traditional coffee shops - kafÃ©nions where there is often an excited game of Tavli (backgammon) taking place and ultra modern coffee shops serving a range of trendy speciality coffees including the ever-popular frappÃ© (iced coffee). Close by stands the Town Hall which has become a popular venue for civil weddings and the open air amphitheatre where concerts and other cultural events are held during the summer months.

For sports fans the town's large stadium often hosts football and other sport matches. The town's Enosis Neon Paralimni FC has a huge following as it is in the country's first division. Because of its excellent climate, the area attracts a number of British and other north European football clubs for winter training programmes as well as athletes keen to practise a variety of track events. Cyprus is blessed with more than 330 days of sunshine which ensure that the sea temperatures remain warm until well into November so it is the perfect place to enjoy all the water sports including water skiing, kite surfing, paragliding and scuba diving.

Paralimni has some great beaches - each divided from the next by a headland. Ayia Triadha is a long curved beach with coarse sand and no snack facilities. The water is shallow so is a popular spot for launching boats whilst  the tiny beach at Mouzoura is popular with locals as it is just a narrow sandy strip, barely100 metres in length, but at one end of the beach there are trees so it is a pleasant to stretch out in the leafy shade and fall asleep listening to the sound of the waves. Further south is the popular larger beach of Louma in the area known as Pernera which is on the northern edge of Protaras. This beach is long, beautifully sandy and the water crystal clear hence the wide selection of water sports available there. 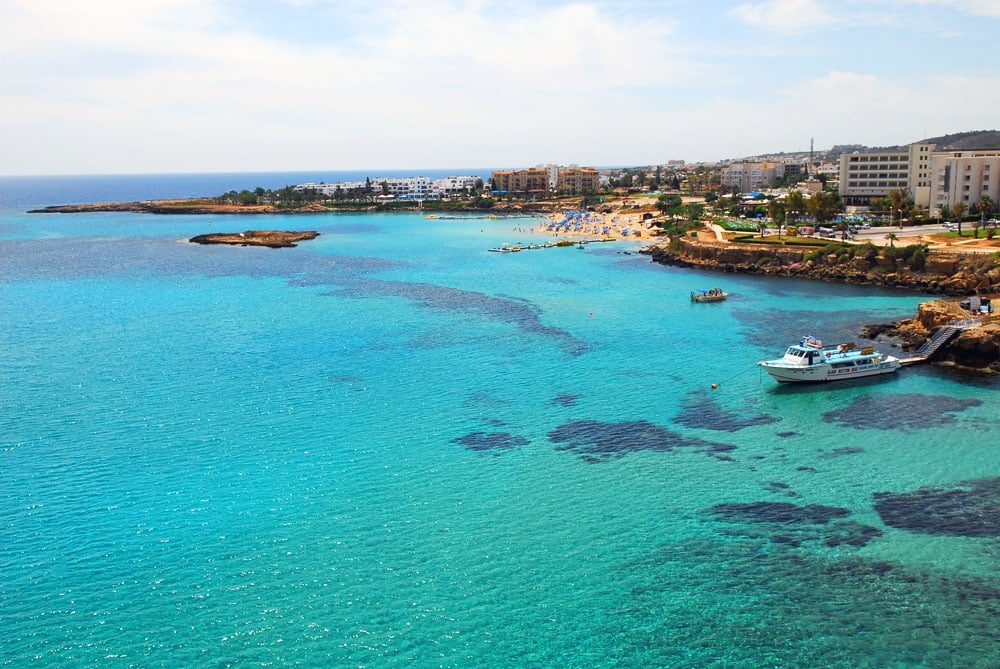 For families visiting the Paralimni area there are plenty of attractions including theme parks, mini zoo, a great range of different shops and the new wooden coastal walk. Close by stands the Famagusta Viewpoint which offers visitors the chance to climb upstairs above the coffee shop to the observation platform and to use the binoculars provided to see into the occupied part of the island to the deserted towns of Famagusta and Varosha.

Protaras, is the tourist area, stretching along the eastern coast of Paralimni and for about ten kilometres.  It begins in the north at âKapparisâ and ends in the south with the âKonnosâ area.  Along this part of the coast lie magnificent bays most of which have been awarded the prestigious Blue Flag.

Protaras, like Ayia Napa was once just a small fishing village and was known as âFig Tree Bayâ a name given to it because the fig tree planted by the cafÃ© is said to have been brought from the east during the 17th century. Today, Protaras is a mixture of hotels and self-catering appartments that are popular with British and Scandinavian families who come to Protaras because of its excellent beaches.

The natural beauty of  crystal clear azure waters and the golden sandy beaches are popular with holidaymakers and residents alike. Hundreds of windmills found in the area irrigate its rich farming soil. where the famous 'Cyprus potato' and all types of vegetables grow.

For those with plenty of energy there is the Byzantine church of Prophitis Elias (the Prophet Elias) which is an energetic walk uphill but well worth the effort of climbing all the steps because the panoramic views from the top are beautiful and on a clear day you can see the Karpasia peninsula in the occupied part of Cyprus to the east. The church is a modern building but perches on a limestone crag and at night looks particularly beautiful as it is floodlit. Not surprisingly, this area is popular with many of the couples who travel to Cyprus to get married.

For those who enjoy 'a slice of the action' there is plenty to do, ranging from water skiing and paragliding to snorkeling and scuba diving. Exploring the area is fun; either on foot along the coastal  promenade or one of the nature trails, or by bike following one of the designated paths.

There are plenty of dining options from a tasty snack in a bar to a sophisticated a la carte meal  and  evening entertainment includes bars, dancing till the morning or a romantic stroll along the beach.

Protaras definitely has something for everyone. 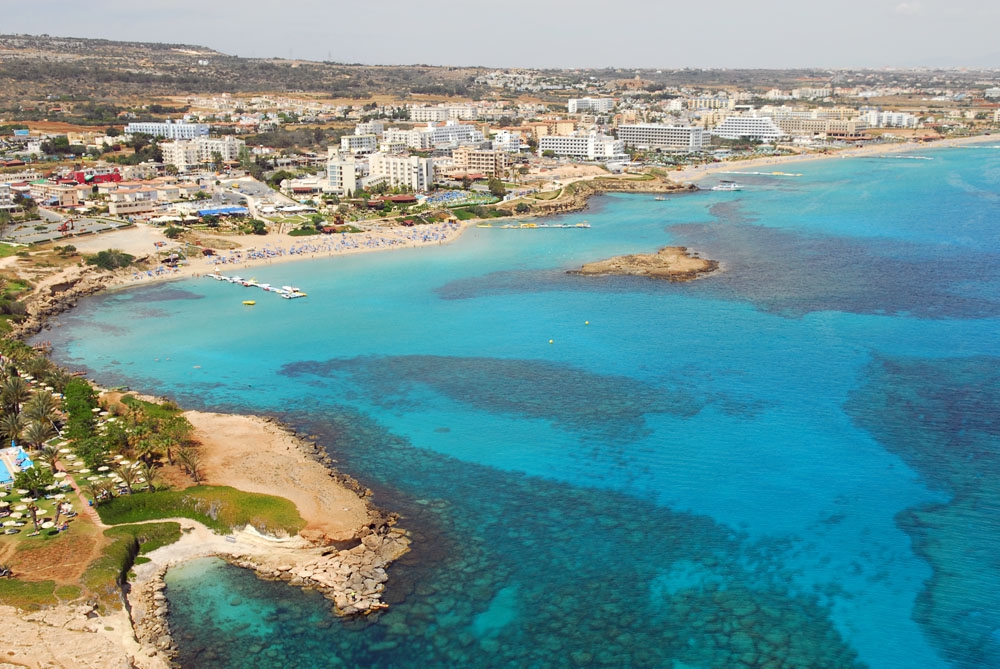